#4 product of the week on ProductHunt, support us!

SQL vs. Python: What language is best for data transformation? 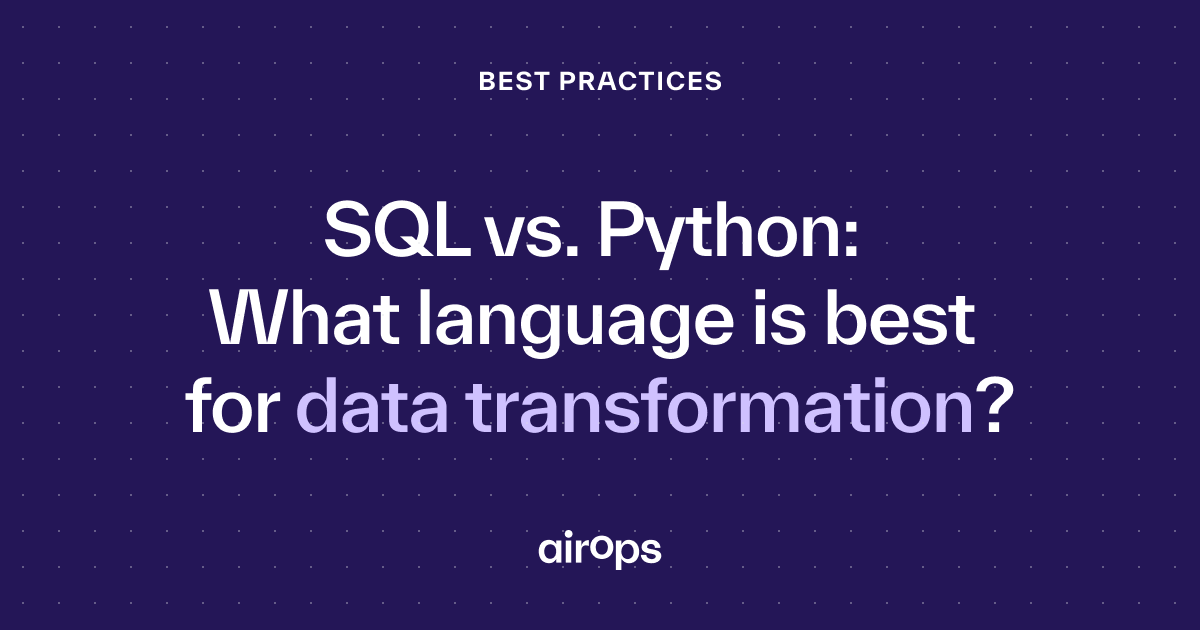 For years, dbt didn’t support Python. This was an intentional decision.

Back in 2017, large-scale data processing in Python was increasingly capable, but it wasn’t truly accessible. There wasn’t a good way to deliver the same “magic” that’s possible with SQL, which is why dbt remained a SQL-only modeling tool.

Here’s how dbt’s co-founder and CEO, Tristan Handy, framed the company’s decision not to support Python in the past (emphasis mine):

“We’re excited to support languages beyond SQL once they meet the same bar for user experience that SQL provides today. And over the past five years, that’s happened.”

As Tristan explained, things have changed a lot over the last five years, namely:

These updates led dbt to reassess support for Python, because the changes mentioned above allow users of Snowflake, BigQuery, and Databricks to do things like:

Additionally, the APIs needed to fuel a native dbt development experience were finally out in the wild.

All of these factors culminated in an exciting product update: As of November 2022, dbt Core v1.3 includes support for Python models.

This is great news! Plenty of analytics engineers and other data people know SQL. Some know Python, especially on the data engineering and data science side. Some folks also know R… but we won’t talk about that right now, even though it’s pretty cool.

But, as with all exciting changes, questions inevitably arise. Namely, “When should I use SQL for data transformations? When does it make more sense to use Python?”

Here’s a cheat sheet you can use to make the right call.

SQL: It’s all about speed and simplicity

In general, it’s best to use SQL when…

SQL’s beauty lies in its simplicity. Compared to Python, SQL is a much simpler language. It’s also exclusively used for data. That means it’s easier to learn, and it provides the quickest, most efficient means of performing simple data analyses.

You need to retrieve, update, or insert data from a database or data warehouse.

Because SQL is a data-first language, it’s designed to communicate with databases and is the best option for accessing, modifying, and managing your data warehouse.

You need to perform simple join and aggregate operations.

The “simplicity” theme returns when we’re talking about uncomplicated join and aggregate operations. Since SQL runs directly on the database, using it for these types of jobs means that SQL typically provides a faster and easier way to develop a query to perform simple analyses.

Plus, data warehouses, such as Snowflake, are designed to perform these operations very efficiently and can process huge data volumes with ease.

Tools like dbt make it easy to use SQL to create staging and intermediate tables as part of a transformation process.

SQL cons: Powerful, but with limitations for more advanced use cases

Of course, no coding language is perfect, and there are some cons to SQL that are worth noting.

SQL queries almost exclusively rely on combinations of joins, aggregate functions, subqueries, and window functions. This is great for non-complex analyses, More complex use cases, such as data science, tend to be a better fit for Python.

A lack of libraries and packages = limited functions and operations.

Since there isn’t a SQL package manager that allows users to import functions, you’ll have to write your SQL queries from scratch.

The dbt package hub makes this less of a concern, but you’re still limited compared to Python: There are approximately 175 dbt packages as of November 2022 compared 300k+ libraries on PyPl.

SQL can be difficult to debug.

This is another key area in the SQL vs. Python debate where the developer experience isn’t quite as robust. Debugging SQL code is more difficult because there’s no option to set up a breakpoint to halt execution – with SQL, you have to execute a complete statement all at once.

You could use CTEs (common table expressions) and split your dbt models into several files, which makes debugging intermediate models a lot easier. But, this isn’t as powerful (or straightforward) as setting a breakpoint in your code.

SQL syntax can differ between databases.

While the basic structure of your SQL queries will always be the same (all databases support SELECT , FROM , and GROUP BY) differences in syntax do exist among databases.

The cross-database macros in dbt_utils can help resolve this, but it’s still a challenge worth noting.

Even if there are certain things SQL doesn’t do well, like data science workflows and large-scale data manipulations (more on that below), it’s still a powerful language that helps data professionals do their jobs efficiently and effectively. We all know it, there’s a strong community around it, and it works perfectly for a large percentage of what we need to do.

That being said, there are certainly times when Python is the superior choice.

On the flip side, it makes more sense to use Python when…

SQL’s simplicity is both its biggest upside, and also its biggest downside. Things like complex transformations on large amounts of data and linear regressions require hundreds of lines of code in SQL.

Basically, if you want to perform data science workflows such as:

… then you’ll want to use Python.

Performing certain tasks is extremely cumbersome in SQL. Python’s power and flexibility makes it much easier to do things like:

Here’s an example that shows the difference between how Python and SQL each handle creating a week-over-week percent change analysis:

While SQL requires each logical step of the calculation to be explicitly defined, the Pandas package used in Python includes the pct_change() method to easily run the calculation in one line.

You need a more robust set of programming libraries to get the job done.

The queries that SQL produces depend on functions, which are inherently limited since they can only perform very specific tasks.

Python uses programming libraries instead (to the tune of more than 300k available libraries as mentioned above). These libraries can be applied to a broader range of projects – there are a sizable number of options for data transformation alone.

However, keep in mind that there are limitations on what you can import – some packages aren’t available on all platforms, including Snowpark and Databricks, for example.

So, which language should I use for data transformation in dbt – SQL or Python?

The answer to this question depends entirely on the data you’re transforming and your goals for the project.

SQL is great for simple queries where you need a quick, efficient means of getting the job done. Python is ideal for more complex data science workflows and large-scale data manipulation.

Ideally, you know how to work with both languages and can choose the best one for your transformation work.

However, even if you aren’t proficient (or fast) with SQL and Python, there’s a tool that makes working with both languages infinitely easier: Data Sidekick from AirOps.

Data Sidekick uses AI to make working with Python and SQL significantly faster. It’s a free tool that allows you to use natural language to generate SQL and Python queries more accurately than ever before.

Sidekick can read a SQL query, understand its output, and then anticipate the query’s structure and generate Python operations to perform the next step. For example, you can use the tool to easily pivot a table, run a forecast, or parse a string field. It’s designed to be a schema aware “Sidekick” to speed up Analytics Engineering tools.

More from the AirOps Blog

With AI Data Sidekick, you can use artificial intelligence to ✨automatically✨ write SQL queries in dbt Cloud.

How to use artificial intelligence to automatically generate YAML entries for your dbt models.

Using artificial intelligence to generate a full Python script from any table.

Use artificial intelligence to instantly generate a full Python script from a dbt model.

How to instantly generate documentation for your SQL tables using artificial intelligence.